Three in ten men (30%) surveyed in Northern Ireland still think the man should pay the bill on a date. This compares to just under one in five men (19%) surveyed across the UK overall. And interestingly less than one in ten of all women (9%) surveyed agree that men should be the ones to pay.

This is according to polling carried out as part of the new Men’s Heads and Hearts report from leading relationships charity Relate and relationships experts eharmony. The report combines insights from interviews with Relate counsellors and consumer polling plus service data. It looks at how men are feeling about dating, relationships and their mental health and wellbeing as we emerge from an extraordinary 18 months.

Social norms that we once took for ed have become fraught with confusion since emerging from the latest lockdown and 14% men surveyed in Northern Ireland think that the pandemic has caused them to lose confidence. So it’s not surprising that feelings of uncertainty are also prevalent in the dating world with almost one in five men (18%) surveyed in Northern Ireland admitting that they feel confused by modern dating. This compares to just over one in ten (11%) of men surveyed across the UK overall. 60% of men across the UK have also confessed to having felt insecure about going on a date.

Relate NI CEO, Duane Farrell, thinks that preconceived views still exist in many parts of society and this is leading to men feeling confused about their roles when dating or in a relationship: “Men are still fighting against the stereotype of needing to be the ‘strong one’ in a relationship. 18% of men surveyed in Northern Ireland think it’s harder for men to date now than it was 10 years ago. I think the key is for men to communicate and be honest with partners about how they are feeling. Many men want to do this but may need encouragement or support to be able to open up.”

Rachael Lloyd, relationship expert at eharmony adds: “It can be confusing to know what to do or say when dating and this can leave some men paralysed by fear and unable to be themselves. However, communication is key. From the initial stages of dating right through to relationships and marriage, we know that couples who see the most success are the ones who are able to communicate effectively and seek help when required.”

The research also explores the impact that the #MeToo movement has had on men. Over a quarter of men (29%) surveyed in Northern Ireland think that the movement has impacted their approach to dating compared to 39% men across the UK overall. Of these 14% feeling more informed about the importance of consent. One in ten male respondents overall (10%) feel ashamed about how they have previously treated women and 8% say it has made them recognise their past behaviour was unacceptable.

Despite these realisations there’s still some way to go to educate men around healthy relationships and to challenge unhealthy behaviour – a quarter of men surveyed across the UK (25%) said they’d not really heard of the #MeToo movement and more than one in ten (11%) think #MeToo is exaggerated.

Despite the challenges men face when dating, the report highlights that more men are opening up about their feelings when in a relationship. Over one in five men surveyed (21%) in Northern Ireland report that they can talk openly to their partner about their mental health compared to 17% of men surveyed across the UK overall.

Whilst this is a step in the right direction, it feels like more needs to be done to help the large majority of respondents who are still struggling to be able to discuss their mental health and wellbeing. Even more so when over one in five men (22%) surveyed in Northern Ireland report suffering from poor mental health.

There is a clear gender gap when it comes to accessing therapy too, with almost double the number of all women surveyed stating that they have accessed some form of counselling in the past compared to men surveyed (23% and 13% respectively) – despite a similar number of mental health issues being faced.

“On the whole, society is becoming much more open about mental health – but men can still feel a certain stigma when it comes to discussing things that might make them feel vulnerable,” comments Relate counsellor Josh Smith. “While it’s positive that 21% of men surveyed in Northern Ireland feel able to open up to their partner about their mental health, this means there are many men who don’t and it’s clear we also need to do more to encourage men to access support such as counselling for their relationships and wellbeing. Getting support early is key and can be really beneficial.”

To find out more about Relate NI services, which include relationship counselling for couples and individuals, and can be accessed face to face, by webcam or over the phone, please visit https://www.relateni.org/our_services 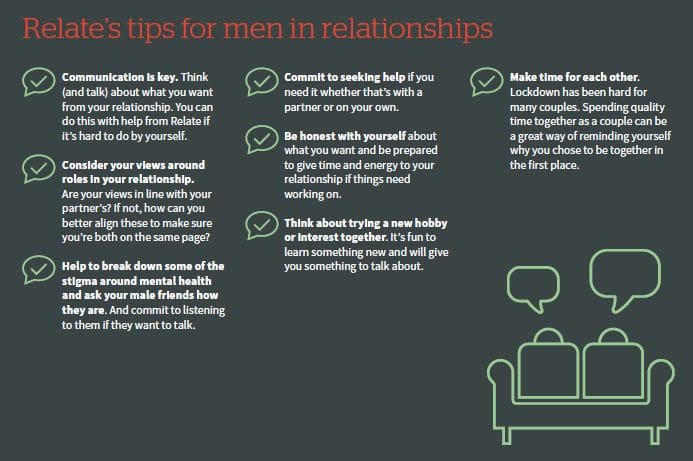 Services available to help with these challenges

Very Interesting Content. I like the concept of preparing your relationship before you have problemsService Attended Sustaining Healthy Relationships – Surestart 4

I now have a better understanding of myself, it is good to know that it is normal to have argumentsService Attended Sustaining Healthy Relationships – Surestart 1

I loved every session. Our counsellor listened to what we had to say and gave us helpful wee homework - would recommend this service to everybodyService Attended Adult Relationship Counselling for Couples

I had a very good counsellor that helped me through a lot and it has made me come out the other side.Service Attended Adult Relationship Counselling for Individuals

Been a lifeline to help us fall in love again - forever grateful!Service Attended Adult Relationship Counselling For Couples

I would just like to say that when I first came for counselling I felt that I was drowning.  I have completed my sessions and I now feel that I can cope a lot better with everything.  Thank you for a brilliant service.Service Attended Adult Relationship Counselling For Individuals

Really enjoyed Relate NI and I'm actually going to miss counselling.  I Found it helpful to find myself again. Very fair and equal within our relationship.Service Attended Adult Relationship Counselling For Couples

I appreciated the straightforward, helpful and informed observations about situations. It really helped me cope during Christmas which is a difficult time for usService Attended Family Counselling

The counsellor was very pleasant to meet with.  They had the necessary skills to speak and listen when appropriate.  I liked their humour and good personality.Service Attended Family Counselling

Relate NI has helped me move on as well as understand myself and situation more.  My counsellor listened to me, facilitated me and was compassionate!Service Attended Relate NI Teen Counselling

We had four funded sessions and cannot express how grateful we are for the help, guidance and knowledge. Our counsellor was incredibly professional, and her experience and obvious passion for helping couples like us was exceptional. She helped us to understand ourselves and each other like we otherwise never would have been able to.Service Attended Adult Relationship Counselling For Couples

I have tried counselling many times in the past. This time actually made a difference. I was able to complete online sessions as well as some face to face.Service Attended Adult Relationship Counselling For Individuals